Dr Jan Telensky, majority owner of AquaCity Poprad, explains the new developments within his nationwide construction company in the UK

Hats off as Tommy Walsh tells of building revolution

A GROUP of construction students have completed work on an abandoned Luton hat factory under a revolutionary training scheme backed by celebrity builder Tommy Walsh.

A GROUP of construction students have completed work on an abandoned Luton hat factory   under a revolutionary training scheme backed by celebrity builder Tommy Walsh.

Engineering Real Results, the largest trades training organisation in the UK, has spent months buying up neglected and derelict properties in various parts of the UK in a multi-million pound move which gives young tradespeople a way round restrictive Government legislation which forces apprentices to beg for unpaid work for decades.

The scheme allows students to comply with Government rules which demand apprentices carry out 100 hours practical training. The rule has forced apprentices onto the streets begging for unpaid work for decades.

Now they can complete their qualifications in weeks rather than years.

Tommy told the crowd at the launch: “We are witnessing the making of history here … an organisation which is actually doing all it can to get people qualified, competent and ultimately into a job which will give them a better life.”

The project included   an old hat factory on Collingdon Street, Luton, which has been renovated and is used for student accommodation for the school.

Between 1750 and the year 2000 Luton was the hat boom-town of the UK and was famous for its straw hats and boaters.  Some of the most famous hatters, including SG Parker and Vyse, were based in Collingdon Street because of its closeness to Victorian road and rail systems.

Many houses made into hat factories have two large rooms built on at the back. In the ground floor room heavy work like blocking and stiffening was done. The room above was used for sewing the hats. These were still being built as late as the early 1900s. Children and adults sweated in the factories for 12 hours a day earning as little as three shillings a week.

Dr Jan Telensky, the financial angel behind the scheme said: “Life was hard in Victorian times in Luton but the hat industry really put the town on the map, there were plenty of raw materials for plaiting and the new Midlands Railway in the mid-19th century was a boon.

“I came to Luton in the late Sixties and I remember the wonder I felt at this grand old town with its dark imposing buildings, I was also fascinated by the number of terraced houses with  these large rooms almost hidden at the back, that’s when I discovered the history of hat-making here.”

Ground Force star Tommy said: “The Government’s commitment to building hundreds of thousands of homes is threatened by skill shortages.  Britain has plenty of young people ready to build a new life for  their families by learning a trade but they come up against a brick wall  when it comes to completing their skills-set – they need practical experience to prove they can do the job and they find it very difficult to get.”

Dr Telensky said there have been thousands of new construction jobs this year as builders attempt to meet Government targets – but apprentices who spent years learning to become plumbers, gas fitters, bricklayers and electrician have been missing out because of the legislation.

He said: “Our own students were losing out. This new scheme, New Vocational Quickstart, involves renovating properties across the country and enables them to get there NVQ in just weeks instead of years.”

Mike Head, a spokesman for Brighter Homes, part of the Engineering Real Results organisation, set up to supply practical training for students, said: “We are committed to getting students into work and if we can help them get onto the housing ladder too that would be brilliant.”

And work was completed on the first of the properties, the controversial Grange Hotel on the Great Northern Road, Dunstable, as students set about the first stage of turning the gloomy old late Victorian coaching house into six affordable flats for young people.

For more than a decade people living near the Grange which had fallen into a near derelict state since it finally closing its doors in 2000 have been complaining but now it is welcomed as major improvement to the bustling Gt North Road.

Paul Senior, chairman of the National Federation of Builders, also backed the scheme, saying: “Anything to provide training and experience to young construction students is a very good thing.   The industry is very dependent on up-to-date skills and experience and we welcome innovative solutions such as Engineering Real Results.” 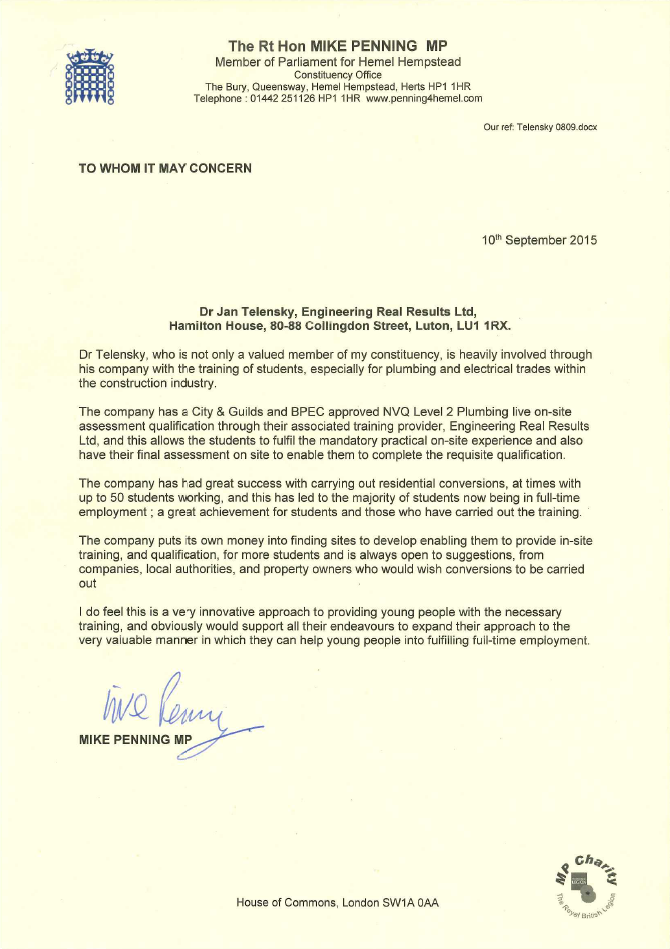 British carmaker Jaguar Land Rover plans to build a new vehicle factory in Slovakia, in its first European production plant outside of the UK, according to two people with knowledge of the decision.JLR will invest in the region of £1bn in the new plant, which will have a capacity of 300,000 cars per year, the FT’s Henry Foy reports.The carmaker, owned by India’s Tata Motors, has signed a letter of intent with the Slovakian government to build the factory in the western city of Nitra, which beat off rival bids from Poland, Hungary and Mexico to build the new plant.

aquacityresort January 27, 2015 No Comments
Celebrity TV builder Tommy Walsh compliments Dr Jan Telensky for his New Vocational Quickstart project enabling would-be trades people to qualify for their NVQ in a fraction of the normal time. Here what Tommy Walsh say, but of more importance what the recent NVQ student say.

Dr Jan Telensky has launched a UK nationwide initiate enabling British based trades people to fast track through their qualifications in plumbing, electrical, heating, gas etc. The opening of the first set of properties, totally refurbished by the NVQ students, was opened by TV Celebrity Builder Tommy Walsh. Mr Walsh praised Dr Telensky for the project adding “Jan is a doer, not just a talker”. It is expected many hundreds will be able to find employment because of the scheme.